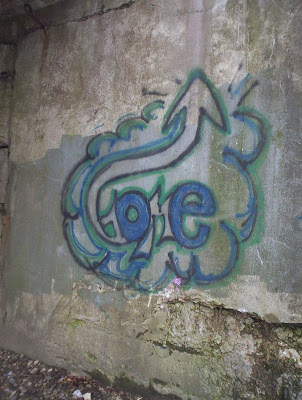 Graffiti is one of my very favorite things in the world, for reasons I've never been able to articulate.

There's some very interesting graffiti under the three bridges I walk under in the park. Chris loves the train graffiti, but it usually passes by too quickly for my eyes.

I probably should've read these comments before I wrote mine a post or two down. But yes, graffiti's awesome. Some kids at central did awesome work. They would sometimes graffiti my name while sitting in detention and give it to me. I still have one. Did you know there's magazines that showcase it but of course don't give complete details becuase they know it's illegal.

Wow! No one ever graffitied my name before!

The best one got stolen from behind my desk. So somewhere right now somebody has a laminated, graffitied "Miss Kizer." I framed another one.